Courtney Love’s recent renewal of her spat with Dave Grohl reminds us that beefs in the music world aren’t just for rappers. Sure, there have been plenty of rap battles – from ones that end in a truce, like Nas and Jay Z (whose white flag to Nas was a record deal with Def Jam) to ones that end in the ground, like the classic Tupac vs. Biggie beef that divided the whole US by its east and west coasts. But when you mix any feuding celebrities with insults and egos, especially when it’s connected to public music careers, you’re bound to get some sparks. Courtney Love vs. Dave Grohl

After accusing former Nirvana drummer Dave Grohl of “taking money from [her] child” during legal battles over her deceased husband Kurt Cobain’s band, Courtney Love most recently accused him of also trying to seduce said child. Now that 19-year-old Frances Bean Cobain is all grown up, it’s refreshing to see that she hasn’t inherited her mother’s mental instability. In response to Love’s tweet threatening to shoot Grohl dead (perhaps a bad choice of language, considering the “Courtney-Killed-Kurt” theories) based on the rumor she heard about Grohl hitting on Cobain, her daughter issued this statement: “While I'm generally silent on the affairs of my biological mother, her recent tirade has taken a gross turn. I have never been approached by Dave Grohl in more than a platonic way.” In a display of humility – and publicity – Love tweeted “Bean, sorry I believed the gossip. Mommy loves you.” Grohl, having responded to Love in the past by filing a motion to have her psychiatrically evaluated, decided to go the mature way once again – by having a representative deny all the claims. Winner: Dave Grohl, for keeping his cool when Courtney lost it (again and again) Wayne Coyne vs. Win Butler

In countless documentaries and stories, it seems the true monsters in musicians come out backstage at shows. The Flaming Lips’ Wayne Coyne certainly got a strong (negative) impression from the few shows he’s done with Arcade Fire: “I get really tired of their pompousness …People treat Arcade Fire like they’re the greatest thing ever and they get away with it[…] They have good tunes, but they’re pricks, so fuck ‘em.” Win shot back with the excuse of jet lag and misconception, saying that while he also likes The Flaming Lips’ music, “I hope I was less of a 'prick' then telling Rollingstone [sic] that a bunch of people I don’t know at all are really assholes.” Oh, snap. Winner: You Win some, you Wayne some… Oasis Vs. Blur

The mid-'90s public quarrel between the two Britpop bands took an ugly turn when Oasis guitarist Noel Gallagher told The Observer that he hoped Blur frontman Damon Albarn would “catch AIDS and die.” Even if Gallagher did think Albarn was “a f*cking knobber” and “a money-making, commercial pop-machine,” this death wish went a little too far – and was off mark of the guitarist’s usually more original insults, like saying Jack White looked “like Zorro on doughnuts” and that Kaiser Chiefs “play dress-up and sit on top of an apex of meaninglessness.” Though Albarn never did have any good rebuttals, he was the bigger man and recently invited Noel Gallagher to collaborate with him – the musician’s white flag. Winner: Noel Gallagher, by default – coming to a comedy club near you soon (hopefully.) Neil Young Vs. Lynyrd Skynyrd 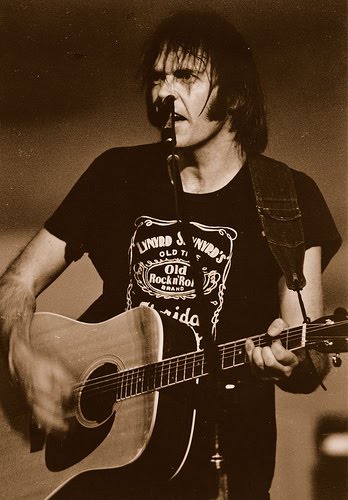 More of a fake feud than a real throw-down, Lynyrd Skynyrd responded to Neil Young’s dismal portrayal of southern folk in his songs “Southern Man” and “Alabama” with this famous line from “Sweet Home Alabama”: "I hope Neil Young will remember / A Southern man don't need him around anyhow." Though their lyrics would suggest otherwise, Young and Lynyrd Skynyrd admired each other’s music and even wore each other’s T-shirts to prove that the musical spat was just in the music for those who couldn’t read in between the ironic and humorous lines. It is even rumored that Skynyrd frontman Ronnie Van Zant was buried wearing a Neil Young T-shirt – though the truth is buried with him. Winner: Lynyrd Skynyrd – majority rules.

Be sure to check out: VSQ Master Series: Nirvana's Nevermind

The String Quartet Tribute to The Flaming Lips

The String Quartet Tribute to Oasis

The String Quartet Tribute to Lynyrd Skynyrd: This Sweet Home