Any Coachella goers out there?

Did you make it through the first week and could use a little rejuvenation? Are you amping up for week two? Do you long to be partaking in the festivities? Whichever you are, listen to our Coachella playlist featuring your favorites from this years roster including Passion Pit, Yeah Yeah Yeahs, Red Hot Chili Peppers and more. Ladies and gentlemen, allow me to present to you: The 2012 inductees for the Rock and Roll Hall of Fame. This recently announced bunch features a few uncharacteristically modern acts, namely, Beastie Boys, Red Hot Chili Peppers and Guns N' Roses. You might read this as a grab for headlines in music publications, or garnering more interest. If this is a trend they want to continue, there are plenty of candidates that would turn heads:

Pixies - It's hard to imagine this not happening eventually, but next year when their debut album Come On Pilgrim turns 25, they'll officially become eligible for induction. The Pixies have had a tremendous influence on many of the bands in alternative and indie that came after; It was 1988's Surfer Rosa that directly led to Nirvana's Nevermind. Their successful mid-decade reunion tour shows that there's still plenty of love and enthusiasm for the band, which makes their candidacy the perfect blend of historical importance and modern relevance.

Public Enemy - If the Foundation is serious about including hip-hop in their broad definition of rock and roll as modern popular music, they will need to honor Public Enemy in 2013. There's a certain symbolism to inducting someone as soon as they're eligible, and after rejecting Eric B & Rakim this year, it would do them well to include the seminal rap group when the light turns green. I refuse to make a pun about a nation of millions holding them back, but it would be an inexplicable misstep to snub Public Enemy.

Bad Religion - I wouldn't be surprised if this never happens, and if it does, I'm sure there would be plenty of reasonable dissent. But in my eyes, Bad Religion is the band that took the political aspect of punk rock the farthest in mainstream spotlight. Their induction would be a recognition of their long career, prolific output and impact as a band and as businessmen in independent music. As of now, the Rock Hall has only recognized punk's original pillars in the Sex Pistols, the Ramones and The Clash. As we get on in our years, they're going to have to look past the first generations of young genres eventually.

The String Quartet Tribute to Pixies

We know now, twenty years after their releases that Nirvana’s Nevermind and the Red Hot Chili Peppers’ Blood Sugar Sex Magik were game changing feats of sonic achievement. However, when the albums first came out,  (in a display of cosmic magic, on the very same day in the fall of 1991), we could only go by our gut instinct, (which said ‘holy crap this sounds good’), and the albums reviews. Here’s what some of the biggest media outlets in the country said about each of these iconic LPs. Nevermind: Originally released September 24, 1991

Rolling Stone: “ A dynamic mix of sizzling power chords, manic energy and sonic restraint, Nirvana erects sturdy melodic structures — sing-along hard rock as defined by groups like the Replacements, Pixies and Sonic Youth — but then at-tacks them with frenzied screaming and guitar havoc…If Nirvana isn't onto anything altogether new, Nevermind does possess the songs, character and confident spirit to be much more than a reformulation of college radio's high-octane hits.” (four out of five stars) The New York Times: "With Nevermind, Nirvana has certainly succeeded. There are enough intriguing textures, mood shifts, instrumental snippets and inventive word plays to provide for hours of entertainment…Nevermind is more sophisticated and carefully produced than anything peer bands like Dinosaur Jr. and Mudhoney have yet offered." Melody Maker: "When Nirvana released Bleach all those years ago, the more sussed among us figured they had the potential to make an album that would blow every other contender away. My God have they proved us right.” Blood, Sugar, Sex, Magik: Originally released September 24, 1991

Rolling Stone: The album “displayed a growing curiosity about studio texture and nuance." Allmusic: "The Red Hot Chili Peppers' best album...John Frusciante's guitar is less overpoweringly noisy, leaving room for differing textures and clearer lines, while the band overall is more focused and less indulgent." Guitar Player: By blending acid-rock, soul-funk, early art-rock, and blues style with a raw, unprocessed Strat-and-Marshall tone, [Frusciante] hit on an explosive formula that has yet to be duplicated." PopMatters: "In one funked-out, f*cked up, diabolical swoop, Blood Sugar Sex Magik reconfigured my relationship to music, to myself, to my culture and identity, to my race and class." Be sure to check out: VSQ Master Series: Nirvana's Nevermind 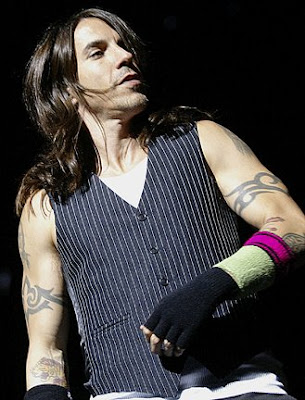 The Red Hot Chili Peppers have continued recording their follow up to the 2006 double disc Stadium Arcadium without former guitarist John Frusciante, whom left the band in 2007 after the band announced their hiatus. Lead man Anthony Kiedis comments that the band is doing better than ever with their new musical direction. Kiedis recently told Spin,

“It’s always going to change the chemistry and feeling of the music when such a creative force as John leaves. He was something unique that shaped our sound then. But it’s fresh and exciting to have a new, incredible musical mind working with us. We’re still the Red Hot Chili Peppers but we have to adapt and welcome new opportunities. That’s how we’ve survived all these years.”

“This album has been one of evolution. Before, some of our jams were hit and miss. On this record a decent number of songs were actually thought out and planned in a way we’d never done before. Bassist Flea studied music theory at university while we were away. With his new knowledge we explored the writing process with a bit more precision. It’s a whole new dynamic. I’ve been the most open-minded and refreshed than I’ve been in a long time. I guess that comes from a much-needed hiatus and becoming a father.”

Get ready for the new album’s working title. It’s based on a friend of the bands acid trip. It’s called Dr Johnny Skinz’s Disproportionately Rambunctious Polar Express Machine Head. The singer explained, “A friend of ours was reminiscing about an acid trip. He told us he’d been playing a sold-out show to the planets and moons, that that was the title of his number-one hit. We told him that for as long as the album was under the radar, that would be our nickname for it.” Be sure to check out: The String Quartet Tribute to the Red Hot Chili Peppers

Available not at iTunes and Amazon

Recently ex-Red Hot Chili Pepper guitar virtuoso John Frusciante has started a new band with percussionist Nicole Turley of the band Weave!, violinist Laena Myers-Ionita, , bassist John Taylor, and multi-instrumentalists Stella Mozgawa & Michael Quinn. The new band, to be called Swahili Blonde, will be releasing an album in the foreseeable future entitled Man Meat (seriously), and it will have a slew of guests like John Taylor of Duran Duran, Alina Meyer of The Like, and her father, Devo’s Alan Meyer. Sounds intriguing huh? If you’re aching for a sample, jump over to the group’s Myspace page for a couple tracks at http://www.myspace.com/swahiliblonde. The page calls the music Afro-beat / Tropical / Tango, but it’s very intense and trippy at times. It sounds similar to some of Frusciante’s solo work, though a little bit less cluttered. It’s definitely a departure from his time in the Chili Peppers. The band is promising some shows with an 8-member band in LA during this summer at some point. In the meantime, Frusciante just released a pay-what-you-want seven track EP with Omar Rodriguez Lopez of Mars Volta fame. The two have collaborated many times, with Frusciante playing on most of Volta’s records. This EP features many instrumentals that sound more like both men’s solo work. You can download it here and any money made goes towards the “Keep Music In Schools” program.