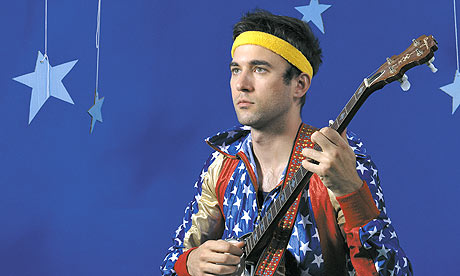 [Welcome back to VSQ's  series, "Raging Strings," where we highlight two rock songs which include strings, and ask you to vote for your favorite.] When Vampire Weekend first broke out onto the music scene with their self-titled debut, critics praised the quartet for their refreshing take on rock music with afro-pop influences.  The New York City indie-pop band used a variety of instruments, including strings, and spawned hits like "A-Punk" and "Oxford Comma." Their song "M79," in particular uses strings in a buoyant manner. Sufjan Stevens, another favorite in the indie music scene, is known for his lush orchestrations about different locales. Although he never finished his 50 states project, songs like "Chicago" off of his "Illinois" album garnered much acclaim. As Stevens sings about the ups and downs of his life with lyrics like "All things go / I made a lot of mistakes," the strings soar and dive accordingly in the arrangement. Let us know which is your favorite by leaving a comment below! Download on iTunes Whether your heart is torn over a werewolf or a vampire, VSQ's Tribute to Twilight Eclipse offers gorgeous renditions of all your favorite songs to soundtrack the emotional journey. Revive your devotion to the love saga with tracks from Metric, Muse, Florence + The Machine, The Black Keys and more. Tracklist:

The Pacific Northwest’s great annual music festival kicked off again this past Memorial Day weekend at the Gorge, three hours East of Seattle, WA. While there was a wide range of musical acts included this year as always, 2010’s lineup was significantly angled more towards the indie crowd, a far cry from the nostalgia acts that dominated last year’s festival, like Jane’s Addiction and Nine Inch Nails. However, this year’s lineup did include a reunion from Pavement as well as sets from older bands like Ween and Nada Surf. Also kind of a big deal was that the festival was 125% carbon neutral. How you ask? Well, a bunch of windmills were installed around the hills of the Gorge to capture a good amount of power to not only offset the power used at the festival, but also to offset all the attendees’ trips back and forth, as well as the bands’. Quite a forward-thinking festival, especially since they generated 25% more power than was even needed. I was hoping to live blog from the festival, but AT&T proved to be too weak to cover all 60,000 iPhones that were in the area. I was only able to Tweet from a lone laptop that I convinced a Verizon employee to let me use at their booth occasionally. But luckily, I kept a lot of notes, and saw a lot of bands, so here’s my recap of the weekend that was. I can only talk about whom I saw of course, and I’ve even got some video from certain sets, so read on: Day 1 was a mixed bag of a day overall, with lots of big indie acts headlining and many buzz bands filling in the rest of the day. Having arrived the night before to set up camp, I got an early start in hopes to catch Laura Marling’s 12:50 set at the Bigfoot (2nd biggest stage, which was also Solar-powered) stage. Unfortunately, the line to get in was way too unorganized with searching bags, so I missed her by minutes. If you haven’t heard her new album I Speak Because I Can then go get it now. She’s only 20 and already a huge star in the U.K. I caught the tail end of Brother Ali’s set over at the main stage, only to see his DJ beat box the theme from Iron Man, even doing an underwater version. The white rapper then got the entire crowd to sway their arms as he sang a song about loving who you are, a topic close to his heart as he grew up being picked on for being an albino apparently. He gave a solid performance to a fairly full audience.

Next I saw Mumford & Sons jam out on the Bigfoot stage, bringing their newly found buzz to the festival. They had a pretty decent-sized crowd for their folk-laden tunes that really got a lot of people dancing. The band definitely has come a long way since supporting Laura Marling on tour. Their hit “Little Lion Man” has been all over alternative radio as of late and they proved why live with a solid performance. Minus the Bear is another band that’s made a lot of progress over the years, jumping genres and styles but always sticking close to their pop sensibilities. This year they hit the main stage and brought a lot of fans out to get their hand waves on when they played their hit “My Time.” This Seattle band has garnered quite a following and the fans came out to show it indeed. Recent Portland residents Portugal. The Man played next on the Bigfoot stage, and their psychedelic brand of guitar pop was a great addition to the afternoon. They played mostly songs from their latest record, the American Ghetto, though mixed it up quite a bit as well. Recently signed to Atlantic Records, this group continues to put out catchy tunes each year. Edward Sharpe and the Magnetic Zeroes took the Bigfoot stage next and a huge crowd seemed to appear from nowhere. The band had turned some heads at Coachella last month and they were at Sasquatch to show why. Their infectious tunes double as kid songs and folk-infused sing-alongs. The band had everyone singing along and throughout the set the crowd grew and grew until the pinnacle when they sang their hit “Home.” It was a pure festival experience, and this band was made for such events. Twirling girls and lots of bare feet were about as this band wound down their set. Broken Social Scene took the main stage 42 hours after a long trip back to the US from Barcelona. The band didn’t miss a beat though, blazing through a long set with plenty of guitar action. The entire touring band was present, including Kevin Drew, Brendan Canning, Justin Peroff, Andrew Whiteman, Charles Spearin, David French, Sam Goldberg, and Lisa Lobsinger. Playing mostly new tunes, as well as old favorites like “Cause=Time” and "7/4 (Shoreline)", the band definitely put on the most impressive show of the day to this point, and the huge crowd loved it. Out of all the times I’ve seen them, I felt this was their tightest and most comfortable set. Buzz band Miike Snow played the Bigfoot stage shortly after, but I could hear them well across from the field where the main stage lay. The three-piece drew a big audience with their recent blog buzz, and many in the audience were eager to see them in person. While they are admittedly not my favorite, I was impressed by their live show and am interested enough to give their tunes another listen. The National were their usual broody selves on the main stage, I know people love them, but I just can’t get into it. These guys are not a festival band, for one thing, their music is just too personal to get across to a big audience in the middle of the day, but people seemed to enjoy it either way. I will say I like the music at times, but singer Matt Berninger’s timbre just turns me off. To each their own right? Vampire Weekend took the main stage shortly after, and the crowd seemed ready to dance to their infectious, sun-soaked tunes. The lawn was the fullest it had been all day and there were plenty of girls screaming when the Colombia graduates hit the stage. The band has certainly sharpened their live performance skills since I’d seen them a year ago, really proving why they had been slated right before the day’s headliner. Playing a good amount of songs from both their albums, the band didn’t stop the dancing until the sun had already dipped below the horizon. At 10 pm My Morning Jacket shuffled onto the stage for the start of their epic two-hour set. The crowd had definitely thinned out a bit after Vampire Weekend, one would assume those under 21 had departed, but that left plenty of room for the rest of us to get closer to the stage. While I was a bit let down that they didn’t play any of the new tunes that had been tested out variously on their recent jaunt, I still loved every minute of their set, which featured mostly hits from Z and Evil Urges. Singer Jim James thanked the crowd for sticking around for the late set, which ended after midnight, and repeatedly commented on how amazing the Gorge is. Even noting that they had played on the Yeti stage (the 3rd, smallest stage) in 2003, and it was an honor to play the main stage seven years later. I tried to picture this band, that seems so huge that they must have always been this big, playing on the tiny Yeti stage where I’d see several great up and coming acts this weekend, but we all have to start somewhere, right? Afterwards I trudged the long mile or so back to my campsite for a good meal and several libations. Overall a great first day of music and fun, and I looked towards Day 2 with a lot of expectations. Videos (nevermind the quality, we did what we could):