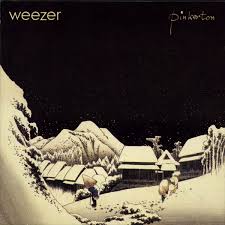 Weezer recently announced yet another album, entitled Hurley after revealing its album cover, which depicts the actor who played Hurley on Lost. While some older fans may not be jumping to pre-order this album yet (did you hear the single? My God…), they may be interested to hear that the band may be trekking out later this year to pay its respects to what some consider the last great Weezer album. The 1996 cult classic Pinkerton was an album that many hold near and dear to their hearts. It will be given the reissue treatment on October 5th, and a recent interview with guitarist Brian Bell leads one to believe their may be a tour dedicated to this momentous event. At last week’s Mile High Festival, Bell told an interviewer that the reissue will include new packaging and possibly a tour. “(It will include) I’m praying — a Pinkerton tour, where we’ll play all the songs off Pinkerton, soon.” The possibility of that seems crazy to most fans, like me, as it’s well-known that lead man Rivers Cuomo is not a fan of breaking out tunes from that album live very often. While “Tired of Sex” and sometimes “El Scorcho” or the other single “The Good Life” are sometimes played, most of the albums’ gems are left to collect dust. This of is supposedly based on how Cuomo took the critics tearing apart the album and a number of issues that I’m sure we’ll never really get the whole story on, but was enough to put the band on hiatus until 2001’s Green Album. The thought of Weezer actually doing a tour based on playing the album from front to back would definitely push some older fans into buying tickets. What do you think? Would you go to the show if Pinkerton was going to be played, or are you just tired of the whole Weezer story at this point? The whole interview below:
Older Post
Newer Post