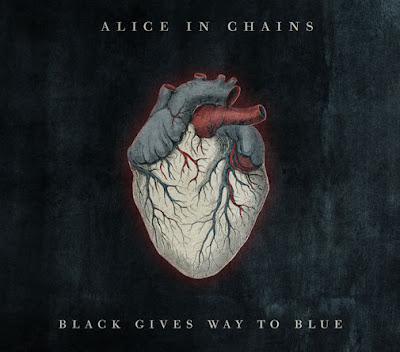 Alice In Chains’ first new album in 14 years is finally out and we were really excited to check it out. The gorgeous first single, “Black Gives Way to Blue” is about the band’s legendary lead singer Layne Staley, who died in 2002. Drummer Sean Kinney wrote on the band’s blog: “There’s not a day that goes by that I don’t think of him. And there’s a lot to address, with all of that stuff coming to the forefront. A lot has happened since 1995, a lot has happened in our lives and we’ve never talked about it or discussed it publicly. So some of that is what’s addressed here. That’s the way we operate, it’s about what really happened in life. We’re not really the fast cars and chicks songs. It’s basically what’s happened in life, but a lot has happened since the last record. And it’s on this record.” It’s definitely a very moving and honest tribute. Amazingly, the single features piano by Sir Elton John, which seems like an odd fit but works. His piano adds a poignant quality to the track, and even though the band didn’t know it when they asked him to participate, Layne’s first concert was Elton John. How cool is that? It’s so great to see the band back and in such strong form. The new lead singer, William DuVall, of Comes with the Fall, had some big shoes to fill, but we thought he did an amazing job. Have you heard the album yet? What’s your favorite song? We’re also very proud of our recent tribute. You can hear song samples here.
Older Post
Newer Post