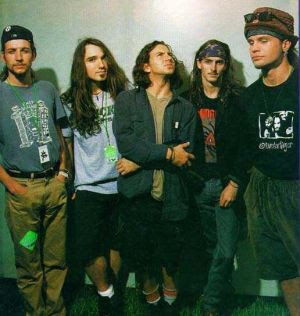 Pearl Jam has launched its own Satellite radio station based on Sirius and XM to celebrate its 20th year of existence. The stations will be on Sirius channel 17, XM channel 39 as well as at Sirius Internet Radio and XM Online. The station, which launched officially at 6pm ET Oct. 22nd with a broadcast of the band's rarities-laden 10th anniversary show at Las Vegas' MGM Grand Arena on Oct. 22, 2000, will highlight the group's two decades of concerts, unreleased songs, and music from the members' many side, solo and pre-Pearl Jam bands. The channel will also feature "The All-Encompassing Trip," which will be a weekly fan round table show hosted by the manager of the band's fan club, Tim Bierman, and broadcaster/fan Rob Bleetstein. The new station will also honor the 20th anniversary with the first-ever official broadcast of portions of the band's first performance 20 years ago exactly at Seattle's tiny Off Ramp Cafe, which took place very shortly after San Diego singer Eddie Vedder flew north to join the band then being formed by Stone Gossard, Jeff Ament, and Mike McCready. Speaking on the announcement, Stone Gossard, guitarist for the band, noted, “I think we've stayed the course in a way that has maybe encouraged people and surprised people. And I think there's more that we can do."
Older Post
Newer Post