Bruce Springsteen and Jimmy Fallon (as Neil Young) Cover LMFAO’s “Sexy And I Know It” Click here to listen!

As a viral-destined finale to Bruce Springsteen Week on “Late Night With Jimmy Fallon” last month, The Boss and Jimmy Fallon did a hilarious cover of the LMFAO hit “Sexy And I Know It.” While Fallon did his surprisingly spot-on Neil Young impression during the song, busting out a harmonica, acoustic guitar and cowboy hat, Bruce Springsteen did his own impersonation – of himself. In a cut-off jean jacket, aviators and a red forehead bandana, Springsteen sang “Girl I got that body / I work out” with his straightest face and lowest voice, flexing his biceps to prove the lyrics true, even after 62 years. As the cover followed the unlikely duo’s 2010 performance of Willow Smith’s “Whip My Hair,” hopefully they’ll give more modern hits the classic rock treatment soon.

Ben l’Oncle Covers The White Stripes’ “Seven Nation Army” Since covers come after the original song is recorded, you’d expect remixes to have a more modern flare . But sometimes they rewind the sound a little back in time, like French soul singer Ben l’Oncle’s rendition of The White Stripes “Seven Nation Army.” Jack and Meg White’s minimalist guitar and drums are expanded into an upbeat orchestra of muted horns, rich vocals and screaming organ solo, leaving the telltale bass line (which is actually Jack White’s Kay Hollowbody guitar run through a DigiTech Whammy pedal set down an octave). Although rock fans are usually quite protective when it comes to preserving the dignity of an original classic like this one, crossovers into unexpected territory do stretch the songs into intriguing forms, giving them a new life – or at least new YouTube comments. Nevertheless, the Grammy-winning, chart-topping song has made quite the journey since Jack first named it after a misheard pronunciation of “Salvation Army” when he was little.

RAC Covers The Smashing Pumpkins’ “1979” Remix Artist Collective (RAC) continues to build its remix empire (which includes The Shins, Kings of Leon, Yeah Yeah Yeahs and Edward Sharpe) with this ‘90s alt-rock cover of The Smashing Pumpkins. Sung by RAC founder André Allen Anjos’ wife Liz Anjos, the song turns Billy Corgan’s characteristically coarse vocals into silky female melodies that glide over ethereal electricity. More synth than guitar-driven, this bubbly electronic remix emphasizes the more kinetic side of apathy in the lyrics “We don't even care as restless as we are…The street heats the urgency of now / As you see there's no one around.”

Just like great books, movies and art,  you can keep re-visiting some songs to find new nuances you didn’t noticed before. Whether it’s a sigh between chords, a scratch on the strings or even a cough before the chorus, these small human elements can add an endearing quality to music, reminding us that songs are not magical, mechanical products but hand-crafted pieces of raw human creation.

Albums that also serve as movie soundtracks (e.g. Pink Floyd’s The Wall) can be expected to have more “human” elements to them, as they’re based on human stories. Some of the non-musical sounds from The Wall movie are left in the accompanying album for a more multi-dimensional sound: From cash registers “cha-chinging” and hearts thumping to school teachers screaming about meat and pudding. I recently noticed a more subtle sound – a deep sigh at the beginning of “Mother.” It’s a fitting auditory relief after the schoolyard chaos in "Another Brick in the Wall Part 2" and a welcoming beacon to the initially soothing musings in “Mother.” While not entirely musical, the sigh fits perfectly within the song.

Another charmingly human moment in music is the squeak Lindsey Buckingham’s fingers make when they slide down the strings of his acoustic guitar five seconds into Fleetwood Mac’s “I Don’t Want to Know.” Author Chuck Klosterman pointed out this detail in Killing Yourself to Live, calling it “the definitive illustration of what we both loved about music; we loved hearing the inside of a song.” He told this to Wilco’s Jeff Tweedy in an interview. Tweedy agreed, adding that he always thought of Buckingham as someone who wants to control every element of his music, so this little “crack he couldn’t sparkle over” was indicative of the greater truth that “nobody can control anything, really.” It’s amazing what a just a little scratch can do.

While The White Stripes' Get Behind Me Satan earned them a Grammy Award and other accolades, it almost didn’t make it to the mixing room. Recorded in Jack White's semi-haunted Detroit home studio, the album seemed to be cursed with failing equipment, leaky ceilings and other misfortunes. Some of these “hauntings” are audible on songs like "White Moon" (a song that even references an ex-girlfriend “ghost”), where drummer Meg White’s bell set falls over with a crash near the end. Giving listeners a hint to the recording location, Jack White's house phone can be heard ringing about 2:50 minutes into "Take Take Take." Looking at more White Stripes songs like Elephant’s "I Wanna Be The Boy To Warm Your Mother's Heart," the band has a history of leaving in these little sounds that others might take out – and by keeping them in, The White Stripes distinguish themselves as charmingly true to the authentic, imperfect process of creating music from bare hands.

Check out Vitamin String Quartet tributes to all of these artists!

The String Quartet Tribute to The White Stripes

The White Stripes broke up last week. In a statement on their website, Jack and Meg announced the dissolution of their prolific band, explaining, “The reason is not due to artistic differences or lack of wanting to continue, nor any health issues as both Meg and Jack are feeling fine and in good health. It’s for a myriad of reasons, but mostly to preserve what is beautiful and special about the band and have it stay that way.” The once-married duo has not recorded an album since 2007’s Icky Thump. Jack has been keeping busy with his bands The Raconteurs and The Dead Weather in addition to his label Third Man Records. He recently finished up work on Wanda Jackson's latest album 'Party Ain't Over', a collection of cover songs, which White produced. Meg, arguably the most intriguing woman in rock and roll, married musician Jackson Smith in 2009 at a ceremony held in Jack White’s backyard. The drummer has otherwise kept a low profile and maintained her customary silence. The White Stripes canceled their 2007 Icky Thump tour due to Meg’s “acute anxiety.”

Their breakup statement continues, saying “The White Stripes do not belong to Meg and Jack anymore. The White Stripes belong to you now and you can do with it whatever you want. The beauty of art and music is that it can last forever if people want it to. Thank you for sharing this experience. Your involvement will never be lost on us and we are truly grateful.” Take a moment of silence now to honor the end of a red and white era, then turn the volume all the way up on your computer and reminisce with these White Stripes favorites.

1. Seven Nation Army: This red and white kaleidoscopic trip out of a video is for the first single from the Stripes’ 2003 album Elephant. The song’s title is a reference to what Jack White called the Salvation Army as a child.

2. Jolene: This pleading tale of heartbreak and desire was written and recorded by Dolly Parton in 1974. The Stripes gave it new life when they covered it on their 2004 live album Under Blackpool Lights.

3. Fell in Love With a Girl: The video for this hit from 2002’s White Blood Cells was directed by legendary music video auteur Michael Gondry. The band had to buy loads of Legos to create the piece, as the toy company refused to give them a wholesale deal.

4. Icky Thump: The video for this 2007 jam is set in Mexico but was shot in Nashville, where Jack currently lives and runs his Third Man Records out of. The song won the 2008 Grammy Award for Best Rock Performance by a Duo or Group With Vocals.

5. We’re Going to Be Friends: We’ll leave you with this pretty little love song from 2002’s White Blood Cells. Jack was right, we were going to be friends, and we are going to miss them.

The new Guitar Hero is coming and it features songs from The White Stripes and Sonic Youth! Not only will there be a bunch of cool new songs, but there is a new guitar design also which claims to have "less chance for error and latency." Another cool feature will be an unreleased live recording of Nirvana’s “Lithium.” For more details about Guitar Hero 5, visit the official website. Complete list of songs: Attack! Attack! UK - “You And Me” Bon Jovi - “You Give Love A Bad Name” Darker My Love - “Blue Day” The Duke Spirit - “Send A Little Love Token” Elton John - “Saturday Night’s Alright (For Fighting)” Face To Face - “Disconnected” Garbage - “Only Happy When It Rains” Kaiser Chiefs - “Never Miss A Beat” Kiss - “Shout It Out Loud” Love and Rockets - “Mirror People” My Morning Jacket - “One Big Holiday” Nirvana - “Lithium (Live)” The Police - “So Lonely” Rammstein – “Du Hast” The Rolling Stones - “Sympathy For The Devil” Sonic Youth - “Incinerate” Screaming Trees - “Nearly Lost You” Sublime - “What I Got” The Sword - “Maiden, Mother & Crone” Thin Lizzy - “Jailbreak” Tom Petty & The Heartbreakers - “American Girl” The White Stripes - “Blue Orchid” 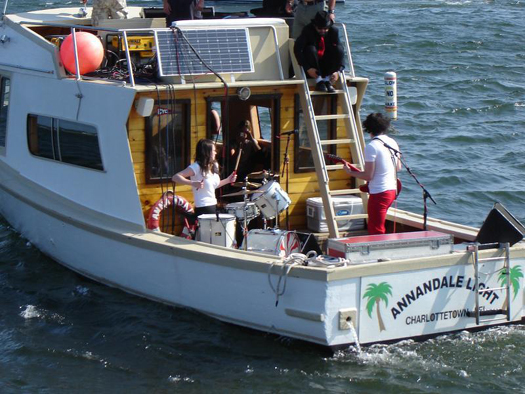 In case you haven't heard  The White Stripes have upcoming tour documentary entitled The White Stripes: Under Great White Northern Lights, which chronicles their 2007 tour through Canada.  Seeing as how they did not fail to neglect even the smallest province and territory in the country, this music DVD should be a great collection of White Stripes performances, if not at the very least an introduction to the cultural and geographical offerings of our northern neighbor.  And we're not talking the usual concert venues.  They extended their musical reach to the least likely locales such a fishing boat, a city bus, etc.  Check out all the pics at Pitchfork. According to the Post, the documentary is due to screen in September at this year's Toronto International Film Festival.