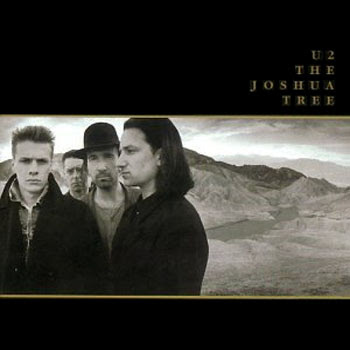 While I was busy being born in November 1986, Bono and the boys of U2 were holed up in Dublin’s STS Studios recording what would be the album that many would come to regard as their greatest work. Considering I only had to survive a mere 5 months of my life before The Joshua Tree came into the world, I would say I’m uniquely qualified to talk about the album’s influence; I can’t remember a time without these songs. And it’s only when I think back with a mission that I realize that every single one of the songs on this album are significant of a time, or a memory, or a phase of my life. “In God’s Country” is totally me driving way too fast right after getting my license; “Bullet the Blue Sky” is (for some mysterious and vaguely disturbing reason) reminiscent of the first time I was angry-drunk; “One Tree Hill” is the rainy morning after…well, something significant. We’ll leave it at that. I don’t know you well enough to elaborate. The point is…the list goes on. And I’m certainly not the only one with personal attachments to The Joshua Tree…how else would it have ended up on just about every Top Albums list for the past several decades? Or win two Grammys? Or end up on the cover of Time magazine, an honor previously held by only three bands: The Who, The Band and The Beatles. That’s not bad company to be in. The band’s previous effort, 1984’s The Unforgettable Fire, had been an experimental departure from their first three albums, all of which were produced by Steve Lillywhite who is also noted for his work with the Dave Matthews Band. Lillywhite was a pop-rock production machine and, while that was working for the boys from Dublin, they wanted to avoid being pigeonholed as just another formulaic rock band. Enter Brian Eno and Daniel Lanois. Experimental art rock pillar Eno was tagged on as producer for The Unforgettable Fire, and while critics claimed that the album lacked focus and punch, the band stuck with Eno and Lanois, hoping that their experimental vision would provide potential for breaking new rock ground. Their lessons from creating The Unforgettable Fire would give the team the discipline to stick to a slightly more structured rock album. The result? Joshua Tree. And from the minute it was released, it was clear they had hit the mark. For over 20 years, singles including “Where the Streets Have No Name”, “With or Without You” and “I Still Haven’t Found What I’m Looking For” have remained radio mainstays. March 9th, 1987 saw the beginning of a magnetic love affair between a band and the rest of the world that still shows no signs of slowing. If anything, it’s this album (not that U2 didn’t have any other work of merit) that has likely kept U2 in the spotlight for the proceeding 20+ years since its release. In theory, had they continued on with the trend set by The Unforgettable Fire, they might’ve slid off the pop culture radar at some point. Instead, they shifted modes, focused on crafting 50 powerful minutes of driving, tension-and-release, writing-heavy, music and ended up mainlining themselves into the affections of everyone while securing their position as major contributors to modern rock music. No amount of latter day, bug-eyed sunglasses wearing from Bono can ever take that away.
Older Post
Newer Post