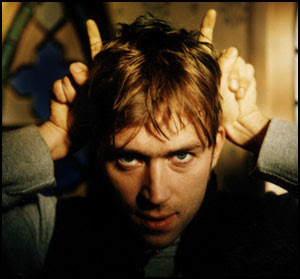 Gorillaz mastermind (among other things) Damon Albarn has announced he’s currently at work on up to three different albums at once. This announcement comes in the midst of the Gorillaz's massive North American tour, which recently has been traipsing along the West coast. This is an interesting development, as Albarn had originally stated the last Gorillaz album almost wasn’t a Gorillaz album at all. In the November 2007 issue of Q, when asked what his top priority for 2008 was, Damon Albarn replied "Well, I'm doing the next Gorillaz thing, but it won't be called Gorillaz." At that point, he hadn’t actually planned to do another Gorillaz album, but that obviously didn’t play out. In fact, months later his co-hort Jamie Hewlett noted to The Observer, "Gorillaz now to us is not like four animated characters any more — it's more like an organization of people doing new projects. That's my ideal model — Gorillaz is a group of people who gave you this, and now want to give you new stuff.” This past week, Albarn told stuff.co.nz that, “There’s another Gorillaz record I’m finishing up too. I’ve actually taken a mobile studio with me on this tour, because it’s the longest I’ve been out on the road since, as I say, the days of Blur at its peak, so I have that luxury now of recording as I go.” And what will the new Gorillaz record be like?

It's basically a tour-diary as a record, I guess it's my love-letter to America. I used to be very baffled by this place, and I guess I still am in some ways; America confused me enormously. But right now with all that's going on this is a good place to be and this has been a great tour, the shows have been very special. The audiences are the closest to mid-90s Blur audiences; I mean it's really been wonderful. And we're getting to play to good-sized crowds. And they know this music; they're really into it. They know it well. So that's great. I mean that's what it's about, right?

In addition to the new Gorillaz tunes, he’s also dusting off another recent collaboration, The Good, The Bad, and The Queen. When asked if there will be another record for that project, he responded, “Well, I would hope so, definitely. However, he seems more focused on a new band that he is “three-quarters of the way through and needs to get finished.” This new project may surprise some fans, as seemingly the ever-open Flea has jumped on for bass work. Albarn noted, “The album that is three-quarters finished is another band with Tony Allen; centered around what he does. But this time it’s him and me and Flea from The Red Hot Chili Peppers and some of my favorite African musicians will be involved also. Flea of course is an anagram for Fela and Flea is so into this music — so that’s been great.” That band seems to be unnamed at the moment, but it sounds intriguing. What do you think would be a good name for this new band?
Older Post
Newer Post