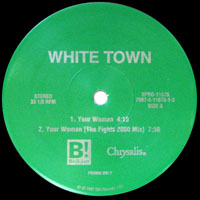 In keeping with their coverage on the Clinton years, Pitchfork Media has decided to put together a list of the top 200 tracks of the 1990s. These range from the completely obvious, to the very vague. Each day this week, the website has released part of the list, the rest of it being revealed tomorrow. This comes after the site released the top 50 videos of the 1990’s. The 90’s were a time of very diverse tastes and styles, we all remember songs like “Shoop” and “No Diggity” in the R&B world (do people still call this music R&B?) and of course songs like “Smells Like Teen Spirit” and “Closer” but did you ever hear “Limb by Limb” by the Cutty Ranks? Or Broadcast’s “Echo’s Answer”? These types of lists make me feel kinda out of touch, even though these songs are all over 10 years old. And you think you know a decade… Check out the beginning of the list and see how many of the more obscure songs you actually have heard. If anything it will get you to hear some new-to-you music. And of course, it will also help you remember those days in the 90’s when you could not get “Motownphilly” out of your head.
Older Post
Newer Post