From the Vault: Queens and the Stones (and Dave Grohl)

Looks like Dave Grohl won't just be twiddling his thumbs while Foo Fighters is on hiatus. Queens of the Stone Age frontman Josh Homme announced Tuesday on BBC Radio 1 that his musical soul mate and buddy Dave Grohl will be picking up his drum sticks and joining the band to record on QOTSA’s upcoming album. There's no official release date for the record as of late, but it's expected to drop sometime next year. This isn't the first time Grohl has teamed up with Homme, though. In 2002, Grohl manned the drums for their breakout release Songs for the Deaf and later in 2009, the pair joined forces to form Them Crooked Vultures, recruiting John Paul Jones of Led Zeppelin to fill out the supergroup's roster. So it goes without saying that the duo are able to produce some pretty remarkable tunes together. During the BBC Radio 1 interview, Homme affirmed saying, "[Grohl] and I have this wonderful musical relationship which we don't have with other people. It's a very cool and comfortable position." It's rumored that Dave might even accompany Queens of the Stone Age on tour to promote the release, but like we said rumored. We'll keep our fingers crossed for now.

While we patiently await more news from the QOTSA crew, join us in taking these VSQ tributes to Queens of the Stone Age out for a spin:

Rock and roll is as much about image as it is about music, and great hair can go a long way when proving one’s worthiness as a rock icon. These five male musicians get our vote for the best hair in rock n’ roll. Best Curl: Robert Plant

Give us the Robert Plant of 1972 or the Robert Plant of today, either way, we’ll happily run our fingers through the singer’s trademark golden locks. Somehow, Plant’s hair looks as good today as it did forty years ago. He must use a whole lotta high quality conditioner. Best Chin-Length: Gavin Rossdale

When Rossdale arrived on the scene as Bush’s frontman in 1994, fans instantly went wild for the band’s Brit-influenced grunge-rock sound and Rossdale’s charming good looks, which were accented by a chin-length cut that was always dyed varying shades of blonde, brown and deep red. It’s no wonder fellow hair chameleon Gwen Stefani fell in love with him. Best Longevity: Slash 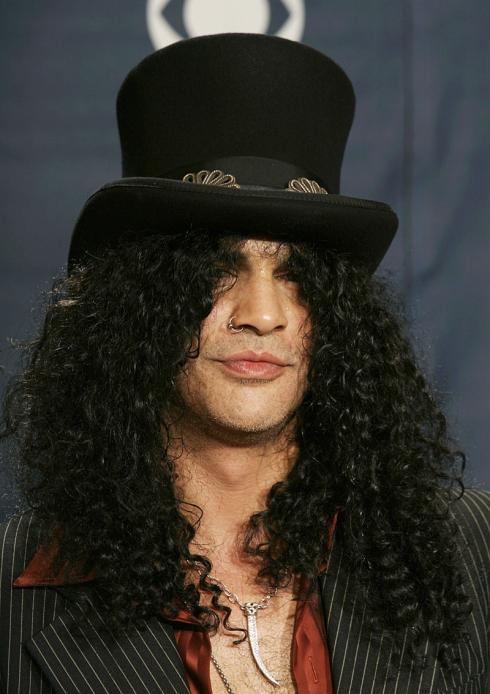 The hair of guitar demi-god Slash is as iconic as the signature top hat that he puts on top of it. In the last 25 years, the lineup of Guns N’ Roses has changed far more often than Slash’s quintessential shoulder length jet-black curls. Maybe they help keep him warm in the cold November rain. Best Color: Jon Bon Jovi

Although we’ll always adore the Aquanetted, highlighted, big-haired Bon Jovi of the eighties and early nineties, the more subtly coiffed JBJ of the aughts serves us just fine too. We admire that through Bon Jovi’s marathon performances, Jon’s golden mane always maintained that perfectly flat-ironed look. Something tells us that Aquanet still may be part of the equation. Best Facial Hair: Dave Grohl

Dave Grohl is rock’s regular dude. He seems like a genuinely nice guy, he’s never been one to make tawdry headlines, and he sports the kind of every-man goatee often spotted at small town bars and biker rallies. We love the color and the shape of it.

Five Things You Should Know About the Foo Fighters

The Foo Fighters made headlines in mid-February by doing a run of secret club shows in some of Los Angeles’ most intimate rock venues. Word on the street is that Dave Grohl and the boys were doing the shows not only to make fans lucky enough to be there go absolutely crazy with excitement, but also to amass footage for their documentary Back and Forth, which debuts this week at Austin’s South by Southwest Festival. In honor of the movie, the band and their 17 (holy crap we’re old!) years of rocking without stopping, we give you five things you must know about the Foo Fighters. 1. Foo guitarist/singer/de facto leader Dave Grohl began writing songs on his guitar while he was drumming for         Nirvana. Grohl has said that he was simultaneously awed and intimidated by Nirvana frontman Kurt Cobain and thus     kept his songs to himself. After Cobain’s 1994 suicide, Grohl was offered a full time gig drumming for Tom Petty and the Heartbreakers. He declined, and instead went into the studio to record the material he had amassed. 2. Original Foo drummer William Goldsmith left the band in 1996 as a response to Grohl re-recording many of his drum tracks for The Colour and the Shape. Grohl hired drummer Taylor Hawkins, who had just come off a gig as touring drummer for Alanis Morisette’s Jagged Little Pill tour, as a replacement. 3. After recording 2002’s One by One, Grohl decided to re-work much of the album before its release. The band ended up re-recording One by One in its entirety, and although the album included the hit “Times Like These” the Foos expressed overall dissatisfaction with the release. Grohl told Rolling Stone that, "four of the songs were good, and the other seven I never played again in my life. We rushed into it, and we rushed out of it." The original album recordings are highly sought after by Foo fans. 4. The Foo Fighters teamed with fellow VSQ favorite Weezer for a co-headlining “Foozer” tour in the fall of 2005. FF are also tight with the surviving members of Queen, whom they’ve played with on a number of occasions, including a headlining show in London’s Hyde Park. The super group performed “We Will Rock You.” 5. In honor of Record Store Day on April 16, the Foo Fighters will release a limited edition vinyl album of covers. The album, called Medium Rare, features the Foo’s take on hits by Cream, Pink Floyd and The Ramones. String Quartet Tribute to Foo Fighters

The Foo Fighters have begun readying a documentary to be released later in 2011. Spitfire Pictures and Academy Award winner James Moll are slated to produce the documentary, which will "chronicle the entire history of the Foo Fighters from the cassette demos Dave Grohl recorded during his tenure as Nirvana’s drummer through their ascent to becoming one of the biggest rock bands on the planet."

The Foos new album is set to be released this spring, which Grohl has noted is a return to the band’s hard rocking roots. "There's 11 songs and front to back, there's not one sleepy ballad," Grohl explained, which they recorded in a makeshift studio set up in his garage.

The band recently gave NME a video tour of the garage, which you can watch here . The band's new album has been recorded with producer Butch Vig, whom Grohl last worked with during his time with Nirvana. Fans of the band, in the US can, get a preview of the upcoming new album, by texting "TASTE" to 66937 to get a free new snippet of the music for their mobile phones. The band is also scheduled to Headline NME Awards Big Gig 2011, at Wembley Arena, on February 25th.

The Foo Fighters have started a contest to see who will shoot the videos for the band’s upcoming album due this spring. The contest, titled “This Video Sucks” simply asks fans to submit reels of their previous work, and then awards only 11 aspiring directors the chance to shoot videos for each song on the album. One would guess that they get a small budget and then the videos are scheduled to be premiered on Fuse. Says frontman, former Nirvana drummer, Dave Grohl,

To see Dave Grohl play drums is to witness something otherworldly, somewhere in that mass of sweat and hair is a relentlessly pounding soul that is completely addicted to caffeine. It’s of little surprise to this writer that Grohl recently admitted his addiction to the world, I mean how else could a human play drums so intensly? Grohl’s recent project, Them Crooked Vultures, released a video called “Fresh Pots” that describes the drummer’s addiction to coffee. His fellow Vultures, Josh Homme and John Paul Jones, elucidate that Grohl easily drinks around 5 pots of coffee a day and that this madness came to a head last year as the band recorded its debut album. The video stated that Grohl was rushed to a doctor after some “physical effects caused by too much caffeine”, or in other words he was tweaking out. Since then he’s supposedly reduced his intake for everyone’s sake. According to medical websites, caffeine addiction can cause nervousness, jitters, gastrointestinal disturbances, muscle twitches and much more, not to mention that has to be horrible for the heart. A Chartattack.com writer, Kate Harper, did the math, “If Grohl consumes five pots a day and the pot holds 12 cups of coffee, he's drinking about 30 mugs of coffee a day, which is still insane and probably really, really bad for him in the long run, but it hopefully won't make him drop dead.” Crazy indeed. Here’s to hoping the new intake of coffee yields a new album from Them Crooked Vultures in the future, and the Foo Fighters are slated to start recording in September. I guess coffee addiction is really the least of most rockstars worries, but Grohl never really shared Kurt Cobain’s tendencies to self medicate, so really this is more kind of hilarious than scary. Check out the video:

U.K. metal magazine Metal Hammer posted a video that features ex-Guns and Roses legend Slash talking about his new solo album that is scheduled to appear sometime in April in the U.S. The album features a ton of guests, including, Dave Grohl, Iggy Pop, Kid Rock, Lemmy Kilmister, Adam Levine of MAROON 5, Ian Astbury, Fergie Duff McKagan, M. Shadows of AVENGED SEVENFOLD, Chris Cornell, Myles Kennedy, Rocco DeLuca, Ozzy Osbourne, and Andrew Stockdale of WOLFMOTHER. Eric Valentine, who’s done work for the All American Rejects and Queens of the Stone Age, produced the album. Filling out the band’s rhythm section were bassist Chris Chaney (JANE'S ADDICTION) and drummer Josh Freese (NINE INCH NAILS). Slash says in the video, “"The idea was really simple in the beginning. These are all artists I wanted to work with — that I thought it would be amazing to do something creative and collaborative. And I was so impressed with what everyone brought to the table. They were all so committed to doing a good job. And we had a lot of fun making these songs."

After this month’s earthquake catastrophe in Haiti, celebrities having been going all “We Are the World” like crazy. And that’s not to make light of the disaster, nor to dismiss the outpouring of generosity from Hollywood; the world would probably benefit if those who were flush with good fortune and the power to sway the public used it for humanitarian causes more often. If we always saw this type of success when it came to celebrities getting the public to rally around a cause, well, we’d be so busy calling into telethons that we’d never actually see these celebrities’ movies or buy their albums. But this is beside the point, which is this: famous people have been kicking ass with this Haiti mess. And that definitely includes the music industry. The latest to kick in their support? Interpol and PJ Harvey, who donated a signed box set of their entire musical catalogue and a stage outfit, respectively, to auctions which will benefit earthquake-stricken Haiti. The auctions, which are hosted by eBay and benefit the OxFam's Haiti Emergency Respons Efforts, were set up last week by Glastonbury Festival co-organizer Emily Eavis. Among other donated items is an original song by Damon Albarn, a guitar signed by Dave Grohl, and if you feel like really kickin’ out the dough, a chance to have dance masters Groove Armada remix your song. All benefits going to Oxfam. Click here to view the OxFam benefit auctions.